Dissymmetry of lift is the unequal rotor thrust, or lift, produced by the rotor disc due to forward flight or wind.

With forward flight, one blade is advancing into the wind while the other blade is retreating, or going with the wind.  Uncorrected, the advancing blade produces more lift than the retreating blade, as the airflow over the advancing blade is greater.  If left uncorrected, the helicopter would be difficult to fly and would roll to the left due to the increased lift from the right side of the rotor disc.  The lift is equalized across the rotor disc through a process called flapping. With flapping, the rotor blades are able to move vertically to increase or decrease their angle of attack and thus increase or decrease the lift produced by an individual blade. 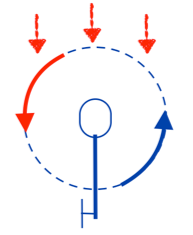 Tagged under: Dissymmetry of LiftLift