The three primary regions of the disc in an autorotation are the stalled, driving, and driven. 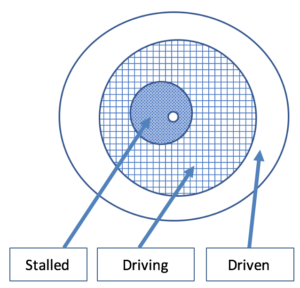 Unless descending vertically in a no-wind condition, the stalled, driving, and driven regions will be a different size on the advancing and retreating side of the disc.  During autorotation, the pilot changes the size of these regions to control the speed of the rotor disc.  For example, raising the collective decreases the size of the driving region and increases the stalled and driven region.  As a result of the decreased driving region, the rotor RPM decreases.